Posted on December 10, 2012 by DrRossH in Plastic Limiting Regulations 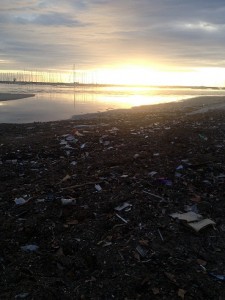 This what was meant to be a beautiful sunset are the kind of images we need to get to the public to see what an environmental problem our lack of regulations and public awareness campaigns are resulting in.

When I first saw this picture, the first reaction is to agree with the photographers intonation and say what a horrible situation and then let it go.   But there is so much more here than just a picture of one of our polluted beaches.

In 100 years plus or minus we will not have this particular problem at all.  People of that time will look back with incredulity at the Anthropocene layer our current generations are leaving.   To them the concept of us making a disposable item of packaging that has a life of just a few minutes for our convenience yet will pollute the earth far beyond even their time will seem unconscionable.   They will not understand why grocery stores gave out free non biodegradable plastic bags by the billions to pollute their lands in their time.

How will we get there from here?    It will not come from the top down, the policy makers are too tighly bound to large corporations.  It will be a ever increasing groundswell of the public fed up with their public lands being polluted, the ocean being treated like a super large landfill, more and more stories about the horrible deaths our waste is wrecking on the innocent natural wildlife and little happening about this from their leaders. 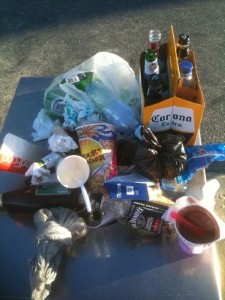 Bottles thrown in trash, but should be in recycle bin

1)      We live in a climate where manufacturers can virtually make anything they want and not be responsible for any of the issues associated with the disposal side of their product.   The selling price of an item is currently entirely based on the manufacturing/marketing costs (manufacturing includes importation businesses) and the desired profit margin added on top.   This is a very irresponsible position and one that manufactures should not be allowed to carry on with.   Why can we allow a company to import a plastic fork that costs about 1 cent and sell it for a profit (say 5 cents) yet be absolutely not responsible for what that plastic fork will after the meal is finished.   The cost of that fork is more than the 1 cent cost.  There is a cost to  collect it from the consumers hand, transport it back to a recycle centre and reprocess it to either a) be ready to be made into another product or b) sent to a waste to energy plant where it energy is converted to electricity.
For Televisions in Australia there is now a $25 fee put on the product at the purchase point and that money is collected into a pool to cover the collection and sustainable disposal of old television sets.  We need a lot more of this.

2)      There is a concept gaining more and more attention overseas of Enhanced Producer Responsibility (EPR) whereby the product manufacturer has to be responsible for the life cycle of the product or its consequences, not only their manufacturing costs.  EPR can have many forms from paying a upfront fee per item produced that is payed into a pool and these funds then are used to collect the wasted product, and recycle it or get its components to be ready for remanufacture or energy recovery.  Similar to the TV situation,(and dare we say it the ‘Carbon Tax’ in Australia) but instead of the seller collecting the $25 for TVs, this version of EPR has the manufacturers paying the ‘Disposal allowance fee’.   They pass the costs on to their clients.    Many manufacturers cry foul at such a thought saying it puts the price of their goods up, sales will fall, they will have to lay off staff and the economy will decline.   Yes selling prices will go up on some items, but we are paying these extra costs already in just more hidden ways.  The selling price of an item has to include all the manufacturing costs and the sustainable disposal costs.  At the moment manufacturers are only charging the manufacture costs and leaving the disposal costs to other people to pay.  In a small beach community for example, the councils have to run waste pickups,  perform frequent beach cleanings, pay manual beach cleaners.   These are all costs the public are paying in their rates.  If we had EPR in place, the purchase cost of the good would be more, but the council rates would not need to cover their clean up costs.  In theory it is cost neutral, yet the manufacturers are getting away with not being held responsible for any of this.  They can produce as they wish caring nothing for the problems their products are making.   This is why we have a big sustainability problem these days.   Why do we have to reply on councils, (public taxes) or volunteers from community groups like 3207Beachpatrol.com.au and many other citizens who like to walk along the beaches and roads to clean up this problem?   Our current model is disjointed and needs to be corrected to adjusted to where a natural cycle of costs and products flow through on its own and sustainability will be inherent with in this.    If that plastic fork did end up costing $1.00 instead, then the consumer may hesitate in buying it and look for a cheaper alternative such as bring their own reusable cutlery, or sit down at the restaurant (instead of taking the dish to the beach)and use their reusable cutlery (yes jobs created in the restaurant with the extra demands on their reusable cutlery).
To pick one EPR example.    A container deposit scheme (CDS).  Manufacturers pay the $0.10 to a fund when they make the container and pass the cost on to their clients who pay it up front then get it back when they redeem the bottles.  There is no extra cost to the redeeming consumer or the manufacturer.  Yet the unredeeming consumers provide a large opportunity for other people to get involved in bottle collection and get some money for their efforts.  Then we would not have to reply on volunteers to do the work of the manufacturers and the litterers.   South Australia shows this works very well.  Just this morning, after a hot day where 3206 and 3207BeachPatrols had cleaned the beaches yesterday morning, there was a plethora of bottles along the beaches again and still more public people out picking this unsightly litter up.

Another substantial advantage of an EPR scheme like this is the recovery of resources.   The most expensive part of any recycle effort is the collection of the spent products from  very widely dispersed locations like in the public hands, back to a few recycling points.  It will never be feasible to pay contractors for this.  In a CDS once the spent items have been collected it is much simpler to transport them in bulk to reprocessing centres.  With a CD,S the public do this very expensive part for FREE.   They get all the bottles back to common points to get their $0.10 back.  It is shown time and time again that if the public put no value on an item they will spend very little time on dealing with its disposal.  One only has to look in waste bins right beside recycling bins to see the huge number of bottles overflowing from  the waste bin yet the recycle bin right beside it is only partially full.  If these items had value, both bins would be empty of bottles as people would be taking them home to recycle or bottle scavengers would be taking them themselves.   There would be far less trash for the councils to have to pick up as bottles are quit bulky and fill up bins quickly.  See attached. This high level of recycling would lead to far less virgin material being used to make all these containers, less imports for Australia saving our funds for domestic workers.

Other EPR schemes include the manufacturers being partially responsible for education campaigns to educate the users of their product to act in a responsible manner, to explain to the public the important of recycling to the economy, the importance of not littering and its effect on our lands and oceans and wildlife.   An educated public will respond quite differently with their purchasing decisions and behaviour compared to a public that thinks there is no problem.

The public cannot be let off too.  Their current littering behaviour has to be curbed with incentives to not litter.   We respect red lights and speed limits so how do we translate that behaviour to anti littering behaviour?  Japan does not have this problem for example.

There are no responses to "Picture Shows Way to Future". Comments are closed for this post.