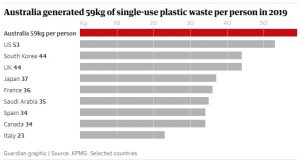 it also reveals Australia leads a list of countries for generating the most single-use plastic waste on a per capita basis, ahead of the United States, South Korea and Britain.

ExxonMobil is the greatest single-use plastic waste polluter in the world, contributing 5.9m tonnes to the global waste mountain, concludes the analysis by the Minderoo Foundation of Australia with partners including Wood Mackenzie, the London School of Economics and Stockholm Environment Institute. The largest chemicals company in the world, Dow, which is based in the US, created 5.5m tonnes of plastic waste, while China’s oil and gas enterprise, Sinopec, created 5.3m tonnes.

Eleven of the companies are based in Asia, four in Europe, three in North America, one in Latin America, and one in the Middle East. Their plastic production is funded by leading banks, chief among which are Barclays, HSBC, Bank of America, Citigroup and JPMorgan Chase.

“Since most plastic is made from oil and gas – especially fracked gas – the production and consumption of plastic are becoming a significant driver of the climate crisis,”

There are no responses to "Twenty firms produce 55% of world’s plastic waste, report reveals ". Comments are closed for this post.