Beached Whale Found With 30 Plastic Bags Crammed In Its Belly

Posted on February 5, 2017 by DrRossH in Plastic & Wildlife

A rare goose-beaked whale that repeatedly beached on a Norwegian shore was so ill that it had to be euthanized — and experts soon found out why. The 2-ton animal had about 30 plastic bags and other garbage packed in its stomach.

There was “no food, only some remnants of a squid’s head in addition to a thin fat layer,” said University of Bergen zoologist Terje Lislevand, according to The Associated Press.
The 20-foot adult male whale had appeared several times in shallow waters off the island of Sotra, and personnel from both the fire department and the Department of Wildlife Conservation repeatedly attempted to herd or tow the animal back into the deep.
The plastic — as well as candy wrappers, smaller bread bags and other garbage— was discovered during the necropsy, Norwegian public media NRK reported. Researchers believe the animal may have thought the bags were squid it could eat, according to Sky News.
The Australian State Government in Victoria doesn’t believe there is plastic problem so has put it self on a long slow path of a plastic inquiry that is getting more delays still.  Even after the federal govt did it own inquiry and  said Yes there is a a problem and the states have to take action now.
Recently the NZ environment minister said there was no evidence that plastic bags caused problems for marine life.
How many more tragic stories like this do we have to read before these politicians stop accepting funds from lobby groups and act for the betterment of the world?
An aside note, they said it was a rare whale.   Well this rare whale will no longer have any off spring so the species now has a smaller future.   All for the sake of a few $ profit for a few people. 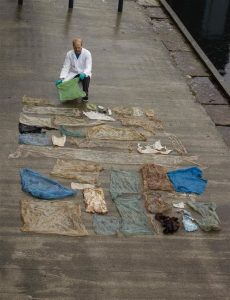 There are no responses to "Beached Whale Found With 30 Plastic Bags Crammed In Its Belly". Comments are closed for this post.