Posted on February 16, 2015 by DrRossH in Plastic Waste News

Eight million tonnes of plastic are going into the ocean each year.

You might have heard the oceans are full of plastic, but how full exactly? Around 8 million metric tonnes go into the oceans each year, according to the first rigorous global estimate published in Science today.

That’s equivalent to 16 shopping bags full of plastic for every metre of coastline (excluding Antarctica). By 2025 we will be putting enough plastic in the ocean (on our most conservative estimates) to cover 5% of the earth’s entire surface in cling film each year.

Around a third of this likely comes from China, and 10% from Indonesia. In fact all but one of the top 20 worst offenders are developing nations, largely due to fast-growing economies but poor waste management systems.

However, people in the United States – coming in at number 20 and producing less than 1% of global waste – produce more than 2.5 kg of plastic waste each day, more than twice the amount of people in China.

While the news for us, our marine wildlife, seabirds, and fisheries is not good, the research paves the way to improve global waste management and reduce plastic in the waste stream. 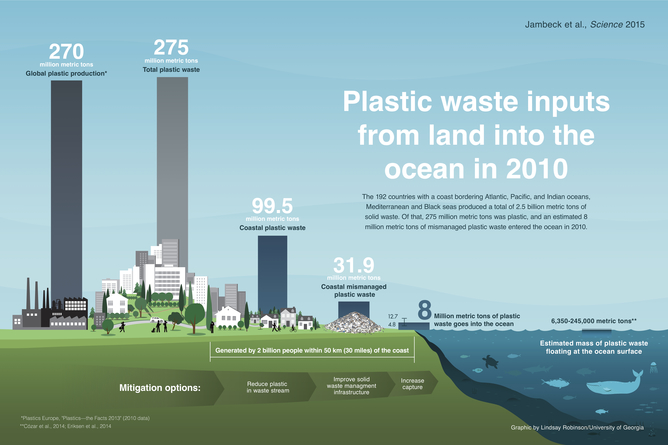 We all know it is a huge problem on a scale with Global warming but this one produces very little attention.

The simplest and most effective solution might be to make the plastic worth money. Deposits on beverage containers for instance, have proven effective at reducing waste lost into the environment – because the containers, plastic and otherwise, are worth money people don’t throw them away, or if they do others pick them up.

Extending this idea to a deposit on all plastics at the beginning of their lifecycle, as raw materials, would incentivize collection by formal waste managers where infrastructure is available, but also by consumers and entrepreneurs seeking income where it is not.

Before the plastic revolution, much of our waste was collected and burned. But the ubiquity, volume, and permanence of plastic waste demands better solutions.

There are no responses to "Eight million tonnes of plastic are going into the ocean each year". Comments are closed for this post.