Posted on December 13, 2016 by DrRossH in Balloons 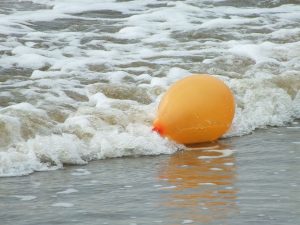 LONGPORT – Concerned about the fragile environment, the Board of Commissioners Dec. 7 passed two ordinances that put the onus on residents to preserve and protect what many take for

Carol Jones of Tuckahoe, a member of the Surfrider Foundation South Jersey Chapter, said that while sailing to Europe 1,000 miles from the coast, she came across a sea turtle that had eaten a balloon and become entangled in the ribbon that was attached.

“So many people here are concerned for sea life and birds,” she said.

Although balloons are sometimes released by accident or mistake, there are many boaters concerned about marine life, Margate resident Steve Jasiecki said.

“Because the ocean is a different environment, it could prolong the degrading of balloons,” he said. “We need to have laws to get people to take heed to the problem. We are sending a message that we care, and that it’s littering and it’s dangerous.”

Joe Hayburn of Ocean City, who helps his friend band osprey chicks, said he has found string tied to balloons in their nests.

There are no responses to "Longport bans release of helium balloons, limits lawn watering". Comments are closed for this post.