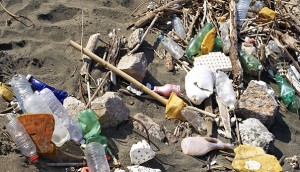 Each year, around 16 plastic bags full of plastic enters the oceans for every meter of coastline – but where is it coming from?

“In 2010, if you turned all the plastic we threw in the oceans into cling film, it would cover the whole of Australia 1.6 times,” he says. “If we keep going the way we are, in 2025 we will put enough plastic in the oceans to cover Australia 6 times over with cling film.”

This cling film along is one of the worst products we’ve made.  It is light weight so moves around readily, it is clear to not all ways seen, it is extremely dangerous to marine life.  Plus it goes used and disposed of so easily by consumers that there is so much of it around causing problems every where.  This is a product we do not need.

There are no responses to "Plastic world – Australia". Comments are closed for this post.