Posted on April 27, 2016 by DrRossH in Plastic Limiting Regulations 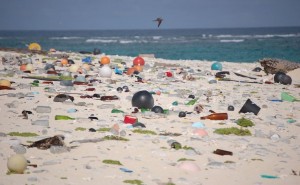 Climate change may be the hallmark of the Anthropocene, an age where humans are effectively ecosystem-managers, but the growing ubiquity of plastic in natural ecosystems is its closely related cousin. Like carbon emissions, plastics’ production boomed after 1950. In 1964, only 15 million tonnes were produced, but by 2014 that number had jumped to 311 million tonnes.

In a rare show of unity, all sides of politics came together to recommend the government “actively support research into the effects of marine plastic pollution,” and particularly so-called ‘micro-plastics’.

The Senate Inquiry into Marine Plastics also recommended that a national plastic pollution database be set up; a ban on the importation of personal care products containing micro-beads; and support for states and territories in phasing out plastic bags and developing targeted education campaigns.

The tri-partisan report further recommended the issue be placed on the COAG agenda for “urgent consideration,” and a working group of Environment Ministers be established to kickstart dialogue

Tagged: ocean plasticplastic in the ocean

There are no responses to "Senate Urges Action On “Toxic Tide” Of Marine Plastic – Australia". Comments are closed for this post.