Trillions of Plastic Bits, Swept Up by Current, Are Littering Arctic Waters

Posted on April 24, 2017 by DrRossH in Plastic Waste News 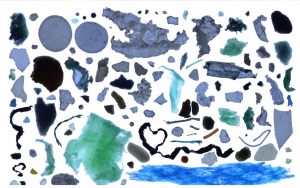 A new study found that a major ocean current is carrying plastic from the North Atlantic to the Greenland and Barents seas, and leaving it there.

Source: Trillions of Plastic Bits, Swept Up by Current, Are Littering Arctic Waters

Almost all of the plastic, measured by weight, was in fragments, mostly ranging from 0.5 millimeters to 12.6 millimeters. The rest of the plastic appeared in the form of fishing line, film or pellets. This mix of plastic types is roughly consistent with the kinds of plastic that collect in the subtropical gyres, though those parts of the ocean amasses a higher concentration of fishing line.

The researchers did not find many large pieces of plastic, nor did they find much plastic film, which breaks down quickly, suggesting that the plastic has already been in the ocean for a while by the time it gets to the Arctic.

There are no responses to "Trillions of Plastic Bits, Swept Up by Current, Are Littering Arctic Waters". Comments are closed for this post.