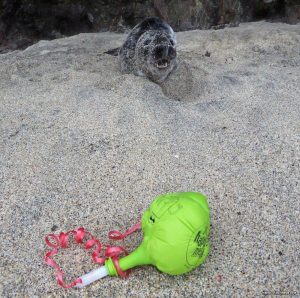 There are calls to stop balloon releases after a string are found littered across a Cornish beach.

Friends of Portheras Cove is warning they can be lethal to wildlife as they can become tangled or eat them.

One discarded balloon was found just a metre away from a seal pup.

There are no responses to "Warnings After Discarded Balloons Found Near Seals – UK". Comments are closed for this post.