Posted on February 22, 2021 by DrRossH in Landfills and Disposal 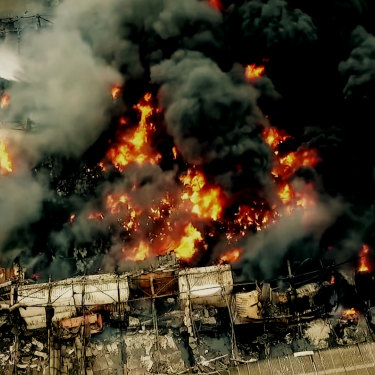 But five years on, we know the truth. Covered by a thin layer of topsoil were the pits that White had dug and that he was filling with toxic waste — millions of litres of chemicals and tonnes of asbestos-contaminated products brought by the truckload.

By the time the scheme was accidentally exposed in 2018, White and his associates at Bradbury Industrial Services had illicitly buried or stockpiled an estimated 50 million litres of highly flammable solvents and other toxic materials.

The failure to arrest this operation also laid the groundwork that sparked two of Melbourne’s worst-ever industrial fires.

This article shows how incompetent the government (all sides have been on waste issues).   They didn’t want to know as it would have meant a huge problem to deal with.    Now the tax payers are footing bills in the $100’s of millions and contaminated land like we have not seen before.   Industry has gotten away with their products being illegally dumped, saying they didn’t know.  This is not good enough, waste is a huge serious issue and companies producing waste need to be audited regularly and a trail of all waste paths needs to be followed and maintained.  We can deal with waste , but it is going to cost money and rightly so.   This article shows how bad it can be if people just close their eyes.

There are no responses to "Toxic waste disaster: how greed and bad regulation allowed Graham White to distort the national market in waste. Australia". Comments are closed for this post.