Posted on October 16, 2017 by DrRossH in Plastic Limiting Regulations

Cash-strapped councils would save money thanks to reduced littering and landfill charges as well as having less recycling bins to collect, says report

Councils across England could save up to £35m every year if the government introduces a deposit return scheme [DRS] for plastic bottles and other drinks containers, according to a new report.

Earlier this month environment secretary Michael Gove told the Conservative party conference that he would work with the industry to see how the scheme might be implemented in England.

Campaigners say it would reduce litter and help tackle plastic pollution which experts say risks “near permanent contamination of the natural environment” with potentially devastating consequences.

However, some cash-strapped local authorities have expressed concern that they would lose money as people would use the scheme rather than recycle through local authorities’ kerbside systems. 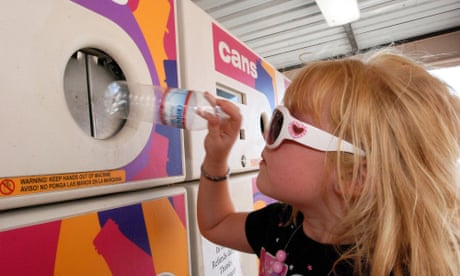 Deposit return schemes for plastic bottles have been shown to cut litter and increase recycling in many countries – but not everyone agrees they’re a good idea.

But Wednesday’s report, based on an analysis of data across eight local authorities including some with high and low recycling rates, found that rather than losing income individual authorities could make savings of between £60,000 and £500,000 each, due to reduced littering and landfill charges as well as there being fewer recycling bins to process.

There are no responses to "Plastic bottle deposit return scheme could save England’s councils £35m a year – UK". Comments are closed for this post.