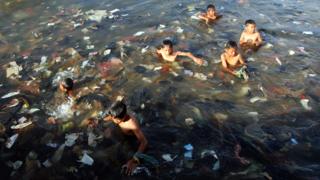 China, Thailand, Indonesia and the Philippines say they will act to stop plastic polluting the oceans.

Nations responsible for much of the world’s ocean plastic pollution have promised to start cleaning up their act.

At a UN oceans summit, delegates from China, Thailand, Indonesia and the Philippines said they would work to keep plastics out of the seas.

A recent paper said much of the marine plastic often originates far from the sea – especially in countries which have developed consumer economies faster than their ability to manage waste.

The Helmholtz Centre in Leipzig, Germany, estimated that 75% of land-borne marine pollution comes from just 10 rivers, predominantly in Asia.

Some of these 20 and 40 year plans are very hard to implement let along follow through on.

There are no responses to "Asian nations make plastic oceans promise". Comments are closed for this post.