Posted on March 1, 2014 by DrRossH in Plastic Limiting Regulations

Australia only has two main national grocery stores.  Woolworths and Coles.  Both members of the Australian Food and Grocery Council. (AFGC).   This council has opposed the introduction of a container deposit scheme (CDS) to stop our nation being littered with drink bottles and cans.  Australia has a huge littering problem with these items.   They are littered every where.  The AFGC has cited reasons for not introducing a CDS from being too complicated,  or being an inconvenience for the consumer. 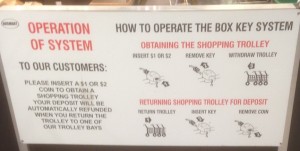 cart.  The deposit will be returned when the trolley is returned.  Yes you read that right!

These deposits on the carts were introduced as people were taking the trolley from the store to take their groceries to their car or dwelling and not returning them.  Even leaving them littering the street where they were left! Imagine.

There are no responses to "Grocery Store Hipocrisy – Australia". Comments are closed for this post.