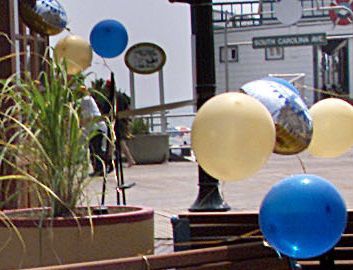 OCEAN CITY — The city Environmental Commission is addressing the dangers of helium balloons released into the air with a new informational campaign.

OCEAN CITY — The city Environmental Commission is addressing the dangers of helium balloons released into the air with a new informational campaign.

Earlier this week, the city began sharing a balloon-release fact sheet through traditional and social media, its website and at city welcome centers telling visitors and residents: “Don’t Let Go!”

Environmental Commission Chairman Marty Mozzo said released balloons become a threat to wildlife that may ingest them or become tangled in their strings.

“What goes up (has) got to come down. Unfortunately, it could and does do a lot of damage to our environment,” Mozzo said.

Other towns in the area have taken up the issue recently. The four communities of Absecon Island — Atlantic City, Ventnor, Margate and Longport — collectively banned the outdoor release of balloons. Atlantic City instituted a fine of as much as $500 for violations.

Mozzo said he doesn’t believe council will address the issue with an ordinance. He believes an education campaign has more impact.

“I personally believe — and I talked to (Mayor) Jay (Gillian) and (city Business Administrator) Jim Mallon — that education is best,” Mozzo said. “People want to be aware.”

There are no responses to "Ocean City launches ‘Don’t Let Go’ anti balloon-release promotion – USA". Comments are closed for this post.