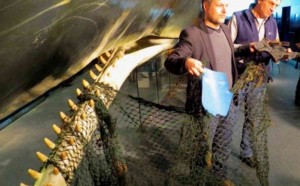 Large amounts of plastic waste have been found in the stomachs of several beached sperm whales.

via Plastic waste found inside washed up whales.

In a statement Schleswig-Holstein Wadden Sea National Park said among the garbage swallowed was a fishing net that was 13 metres long, a plastic car engine cover and the remains of a plastic bucket. While this was not the reason for the stranding and death of the animals, veterinarians and biologists suspect the whales would have had major health problems as a result of swallowing the debris.

As if the whaling industry was not killing off whales fast enough now we are all doing it with our overuse of plastic.  Stop using disposable plastic items!

There are no responses to "Plastic waste found inside washed up whales – Germany". Comments are closed for this post.